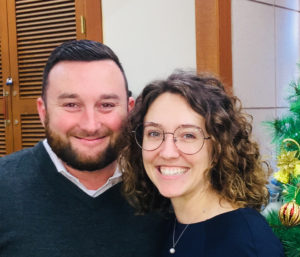 I want to start off by thanking Shore Baptist for welcoming me so beautifully. It has been such a blessing to move to a new country and already have a church, care group, and friends from the start. Thank you for making me feel at home so quickly!

For those of you I haven’t met yet, I’m Erica, Jeremy’s fiancée. I am from the States, but for the last two years, I was living and working in South Korea as an English teacher. About six months into my time there, Jeremy came into the picture thanks to our mutual friends, Jason and Ruth. While the distance was frustrating at times, we see how God used it to grow and strengthen our relationship. Even so, we are thrilled the distance is finished and will be married in just under two months!

Going back a bit further, I grew up in Southern California the youngest of four kids. My parents raised us all very faithfully in the church. We attended the same Assemblies of God church throughout my childhood.  I grew up attending Vacation Bible School, youth camps, and
conferences. When I was 16, I went on a mission trip to Europe, then to Fiji when I was 18. It was then I felt my faith was lacking when compared to people who have had to trust God for so much more in their day to day.  A passion grew in me to go out and meet people from different cultures, teach them, learn from them, and pray with them.

When I started university, I was a full-time student and worked at a restaurant. I let myself get distracted and pulled away from what I grew up knowing. I never lost faith, but I lost the passion I once had to serve the Lord. I was really discouraged by it and allowed it to take me even further away. After I graduated, my sister and I travelled around Australia and New Zealand for four months. When we arrived back in America, I realized I needed to change location if I wanted to break the pattern I
seemed to have been stuck in. That’s when God completely opened the doors for me to teach in South Korea in 2014.

In Korea, I got involved in church again and met a beautiful group of women. We talked, we prayed, we cried, we studied the Word, and we grew so much together. After that year, I joined YWAM in Tauranga, New Zealand for five months in 2015. For the first three months, I dug deeper into His word and character. I better understood His grace and forgiveness for the extreme gift it is and how much I don’t deserve it.  For the second two months, we went to Vanuatu and lived in villages where
we got to live life alongside the families while sharing the love of our Father. My desire to continue teaching ESL grew as I spent time with the kids in the villages. When I went back to the States, I applied for a master’s program in Education. I moved back to Korea for two more years so I could complete the program and teach at the same time.  Little did I know that’s where I’d meet my future husband while he was an ocean away in New Zealand.

Through our relationship, I have once again been reminded of the depth of God’s grace and mercy. We, the church, are the bride, and Jesus is our bridegroom. Hosea 2:19-20 reads, “And I will betroth you to me forever. I will betroth you to me in righteousness and in justice, in steadfast love and in mercy. I will betroth you to me in faithfulness.  And you shall know the Lord.” While I have “run away,” God not only forgave me, but has betrothen me to Him forever. I’m beyond amazed that
Jeremy and I get to enter into a relationship that symbolizes the depth of God’s grace. And I feel so blessed we have the family of Shore Baptist to pray for us, guide us, and encourage us as we soon become husband and wife. I look forward to getting to know all of you!