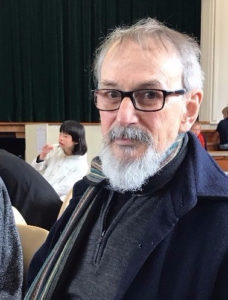 Neal Grant left New Zealand for England in 1963, at the dawn of the ‘Swinging ‘60s’. With a talent for shop design and fit-out, he carved out a successful career in the retail fashion industry. The very first Top Shop, now the flagship for an international chain of over 500 stores, was “his baby.”
Fast forward to 1976. Thirty-five-year old Neal – successful and popular, with a correspondingly busy work and social life – was surprised by a new sensation: depression. In December that year he took a trip to New York City with a group of friends. “We had an absolutely amazing time, and I hated every minute of it”.

Back in London for a New Year’s Eve dinner party, he sat next to an acquaintance named Angela. “You’re a Christian, aren’t you?” he asked her. “Won’t you tell me about it?” Angela shared her faith, though she was not then walking with God. She even did her best to steer Neal away from the Catholic faith that had attracted his interest.
Later that same night, as the party moved to a nightclub, Neal found a seat next to Angela again. “Something is telling me I need to change sides,” he told her.
“I think I know what that means,” she replied.

A couple of weeks later, Angela invited Neal to join her at a special church service in a small provincial centre.  Unbeknownst to Neal, he was about to experience one of the greatest preachers of the 21st century. Doctor Martyn Lloyd Jones had been invited to preach at the opening of a new church, and Angela and Neal found themselves squeezing into the front row, directly beneath the pulpit.
As Lloyd Jones began to speak, Neal was transfixed. “His text was 1 Corinthians 2:2 “For I determined not to know anything among you, save Jesus Christ and him crucified.”  As he expounded the scriptures, I just got hotter and hotter. “That’s me; he’s talking about me!” I thought.  Eventually I just sort of collapsed forward into my own lap. I couldn’t move.  Angela thought I’d gone to sleep.”

As the sermon came to a climax, Neal remembers Lloyd Jones punching the air in a characteristic gesture of emphasis and passion. “God punished His own son, for your sins!”
The service ended, and the congregation filed out, each in turn shaking hands with ‘the Doctor’.
As they paused outside the church, Angela turned to Neal. “Don’t you want a cigarette?” she asked the long-time chain smoker.  Neal shook his head, “No. No I don’t want a cigarette!” “What’s happened to you,” she asked. “I’ve been saved!” he exclaimed.  Angela’s jaw dropped, and Neal watched her face redden with shock.

Neal travelled home a transformed man. He and Angela, whose own faith had been renewed, began to attend a reformed Baptist church in West London, and Neal quickly decided he must be baptised. He wrote to Dr. Lloyd Jones to tell him what had happened, and ask him if he would come to his baptism. When a new Christian friend found out what he had done, he asked “Do you know who Martyn Lloyd Jones IS?!” Touchingly, but not surprisingly, Lloyd Jones wrote back, expressing his joy at Neal’s conversion and his regret that ‘circumstances prevented him from attending.’

Eventually Neal and Angela would marry and enjoyed 27 years together.  After her death in 1999, Neal returned to New Zealand.
Now in retirement, Neal has recently completed a Bachelor of Theology at Laidlaw College.  Earlier this year he was diagnosed with leukaemia, and is currently experiencing the unpleasant side effects of chemotherapy.  Throughout his studies he has befriended and mentored younger students, and this ministry continues, despite his illness.

A final word from Neal: “He drew me up from the pit of destruction, out of the miry bog, and set my feet upon a rock, making my steps secure. He put a new song in my mouth, a song of praise to our God”.
Psalm 40:2-3a